I clearly failed with that new week's resolution as this post/link-up is so last minute it's a little but embarrassing.
*FUN FACT* It's actually a lot embarrassing....

The sad thing is that I've known about CAS(e) this Sketch!'s challenge for a while and I actually made the card but I just never got around to posting it! Whoops? I actually made 3 cards using this week's sketch challenge because....you know, I don't really know why. I just felt like it I guess. 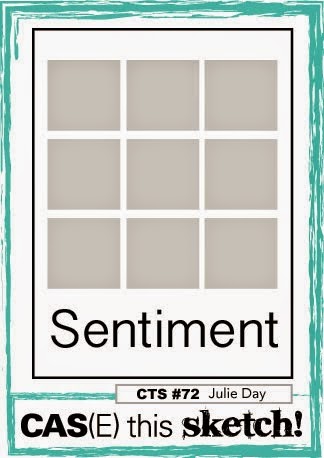 This is the first card I got around to doing.

I completed it over the weekend and it kind of just sat on the craft room table ...watching me make other card and collecting dust. I really liked the idea of cutting one picture into a grid but omfg what-the-balrogs batman! IT WAS SO MUCH HARDER THAN I THOUGHT IT WOULD BE. I almost gave up halfway through but I'm glad I didn't because I actually really like this card :) (I think it's the dark brown cardstock. I'm slightly obsessed with it. It reminds me of ....4th year coffee catch-up dates at medsci) But it's kind of a huge deal that I like it because these past two weeks because I've felt very blah about everything I've made so I'm really glad that I'm not disappointed with this one :D

dombomz
figuring out life, one mistake at a time.